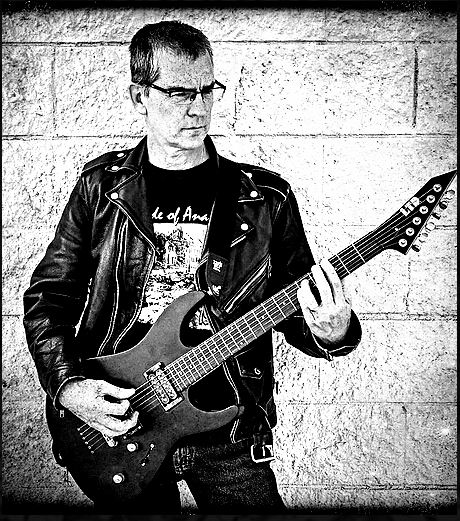 Almost 20 years in the making, THIS SIDE OF ANARCHY is the culmination of one man's journey through The Pinnacle of Punk Rock through the 1980s, through the 90s grungier sound, and the softer sounds of the new millennium. Having diverse origins in rock, pop, blues, heavy metal, in various bands, Dennis moved on to PUNK ROCK and became a major force in Los Angeles' Underground bands SOCIETY GONE MADD! and THREE WOMEN IN BLACK. After writing recording and touring from the early 80s to the new millennium, Dennis took some time to refresh and to help raise his family and revise his craft and develop a sound all his own. Now that he's back, in this world of cute social media memes, inspirational self-help gurus and a system that wants to put us into organized, weak little boxes, he is now ANGRIER than ever at our society's state of affairs and Dennis continues to represent the TRUE nature of Punk Rock. Using the creative rage-child of his past & current experiences, he released the debut album 1917, two smash EPs; I HAVE A PLAN and DEVILS MAY PASS, a second album TYRANNY OF THE FEW, and most recently the EP Insatany. The music has been described as "coming from a rare source. That source is honesty, it is rebellion, it is the source of rock & roll that has survived and evolved from the first barre chord ever played through a Fender or Marshall amplifier and the music is written from a desperate love of humankind, they are written for the future. That is assuming there is a future. In times of struggle we have always had courageous voices come forth to light the fires of freedom. The truth is, as a society, we need artists like this. In times of struggle we have always had courageous voices come forth to light the fires of freedom from the Tyranny of the Few."

This Side of Anarchy is always working on new material for the next release.

For a more in depth look at Dennis' biography and an introduction to him chronicling his music career so far, check out this video on YouTube.

AND for an even more in depth look at him and other awesome independent bands of various genres that support each other, check out his show Band to Band on YouTube.

This Side of Anarchy is on

Sell your beats online at ReverbNation.com